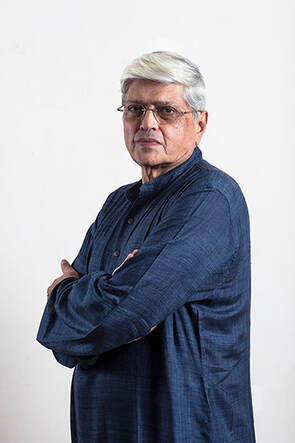 Gandhi in the Grip of Violence
Violence – physical, mental and intellectual – surrounded Gandhi all his adult life. In a single individual’s violent act, he met his end.
His response to this experience remained singularly consistent. He met violence with its exact opposite.
Was he offering a plain contrast for contrast’s sake ?
Or was there a nuance to his theory and practice of non-violence ?
Today, is his a ‘creed outworn’ ?​

Gopalkrishna Gandhi studied English Literature at St. Stephen’s College, Delhi, from 1961 to 1964 and again for his Masters’ at Delhi University from 1964 to 1966. As was the vogue in his days of youth, he entered India’s Administrative Service (IAS). Positions, administrative and diplomatic, that he has held include being Secretary to the President of India, High Commissioner for India in South Africa and Sri Lanka and Ambassador to Norway and Iceland. He was Governor of West Bengal from 2004 to 2009, and now teaches at Ashoka University, Sonepat, in its Department of History and Politics. He writes widely for Indian newspapers and his books include A Frank Friendship: Gandhi and Bengal (2008).

Some writings from Professor Gopalkrishna Gandhi related to the theme of the conference:
"Gandhi Won't Leave India." The New York Times, August 14, 2017.

"Gopalkrishna Gandhi on Mahatma Gandhi: The Pulse of a Legacy in an Age of Heroics." The Hindu, October 2, 2019.