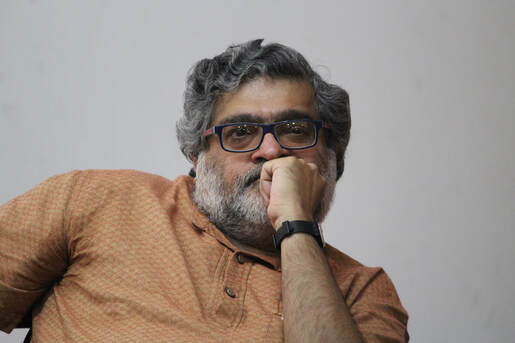 Vinay Lal is a writer, blogger, cultural critic, and Professor of History at UCLA. His books include The Empire of Knowledge: Culture and Plurality in the New Global Economy (Pluto Press, 2002),The History of History: Politics and Scholarship in Modern India (Oxford, 2005), 2 volumes of The Oxford Anthology of the Modern Indian City (2013), and two edited volumes of the Backwaters Collective on Metaphysics and Politics (Oxford UP). His intellectual interests include nonviolence, Gandhi, resistance movements, Indian history, global politics, historiography, cinema, and the politics of knowledge systems. He blogs at vinaylal.wordpress.com and he has an academic YouTube channel (youtube.com/user/dillichalo).

Lal will on the opening day furnish the introduction to the conference and provide a preliminary framework for some of his thinking on Gandhi, whom he describes as a "Player of Infinite Games", and the impulse that led to the organization of this conference.  His main presentation on Saturday, February 1, is entitled "Gandhi, 'the Colored Races', and the Future of Satyagraha".  The abstract follows:
A small but growing literature has focused in the last two decades on the idea of a “Negro Gandhi”, and W. E. B. DuBois, editor of the Crisis, a journal of the “darker races” that was the organ of the National Association for the Advancement of Colored Peoples (NAACP), has figured prominently in such discussions. However, the African American press, represented by such newspapers as the Pittsburgh Courier, New York Amsterdam News, and the Chicago Defender, was as a whole prolific in its representation of the Indian independence movement, and some newspapers even had correspondents whose primary responsibility was the coverage of events in India.  In this paper, I propose, in the first instance, to analyze the worldview of the African American press and its outlook towards the movement in India.  I then suggest that prevailing conceptions of the ‘Global South’, focusing on anti-colonial movements in Asia and Africa, generally overlook the history of black America from the beginning of the Harlem Renaissance to the “end” or demise of the Civil Rights movement following the assassination of Martin Luther King in April 1968.  I suggest therefore that a more ecumenical conception of the ‘Global South’ ought to be sensitive to African American history, and argue that African American newspapers played a critical role in shaping notions of solidarity of colored peoples, pivoting their arguments around the Indian independence movement and particularly the satyagraha campaigns of Gandhi.


Some recent writings from Professor Vinay Lal related to the theme of the conference:

"Mahatma Gandhi: An Environmentalist by Nature." The Hindu, October 1, 2019.

"The Deep Ties Between Gandhi and the American Civil Rights Movement." The Indian Express, September 30, 2019.​